The West Sammamish River Bridge was constructed in the 1930s and is nearing the end of its engineered life. To ensure the long-term safety of our community, the City of Kenmore is replacing this structure.

This project will replace the existing southbound bridge across the Sammamish River and include the construction of new sidewalk and bike facilities on the west side of the road between NE 170th St and NE 175th St. The West Sammamish River Bridge Replacement Project will also include new signals at NE 170th St and NE 175th St, new streetlighting, utility undergrounding and new landscaping.

Construction started in March 2020 and will be completed in late 2022.

On Thursday, August 11 from 6:00 p.m. to 10:00 p.m. come down to celebrate the new bridge and enjoy a fun summer evening of food trucks, fun, live entertainment and fireworks. For more information visit the event page. 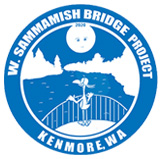 In case of an emergency, please dial 911.

The West Sammamish River Bridge was constructed in the 1930s and is nearing the end of its engineered life. To ensure the safety of our community, the City of Kenmore implemented weight restrictions on the bridge in 2014 until its replacement. The City is taking advantage of the replacement to add a bike path, American’s with Disabilities Act compliant sidewalk and new enhancements such as improved streetlighting and signals.

Safety is critical to the success of this project—and that doesn’t exclude safety for wildlife. Salmon migrate for months at a time in the Sammamish River, which means that work can't be done below the water during that time. The City of Kenmore worked with biologists and the permitting agencies to determine the times allowable to work in the water, otherwise known as the fish window. These narrow windows of in-water work limit the speed at which the construction contractor can complete the project. The City anticipates needing three fish windows to finish all the necessary work needed in the water.

The following three fish windows are when work will be done in the water:

The City of Kenmore was able to find several funding sources:

Building a new bridge requires a large number of permits, including several from other government entities. In late 2018, the City was waiting for final permit approval from several federal agencies, when they were impacted by the government shutdown. Once they had a chance to review the permits, the City missed the opportunity to work in the 2019 fish window and pushed out construction for one year.

Emergency vehicles will have priority access during construction. The City of Kenmore will be coordinating with local police and fire for emergency planning, as well.

The City of Kenmore will coordinate with local schools to determine safe drop-off and pick-up areas for buses, cars, cyclists, and pedestrians. The City will provide advanced notice when these changes will take place. Sign up for construction alerts to learn about any changes that might affect travel times.

Routes will not change, but bus stop locations will be moved to avoid conflicts with construction. Temporary stops will be located relatively close to their existing locations. Signs have been posted showing where temporary bus stops are located. After construction, permanent bus stop locations will be changing. For more information on live bus routes, visit King County Metro Trip Planner.

Yes. However, during certain periods of construction, your access to the boat launch will change. Sign up for email construction updates to learn more about these changes before they occur.

Here are the primary impacts you can expect:

During the 10-month period when the west (southbound) bridge is closed, traffic for all modes of transportation will be moved to the east bridge. One lane of vehicular traffic will be maintained in each direction; however, drivers are encouraged to find alternate routes and/or adjust commute schedules when possible due to increased congestion. Pedestrian traffic will occasionally need to be detoured through Rhododendron Park to accommodate construction.

Yes! The City of Kenmore has been in communication with Bothell, Kirkland, and other nearby cities. Check out the interactive map on the website for more information about projects in Bothell and Kirkland, as well as additional projects in Kenmore.

Great question! Please visit KenmoreConstruction.com and sign up for email updates. You can also call the project hotline at (425) 201-4147 or email info@kenmoreconstruction.com.

The water level in Lake Washington is controlled by the U.S. Army Corps of Engineers and can vary by more than two feet, which impacts navigational clearance under the West Sammamish River Bridge and perceived bridge height. Once complete, the height of the new west bridge will match the east bridge, and will allow for similar clearance under the bridge. The width of the west bridge will be 45 feet once complete, to include 2 southbound lanes and a designated multi-use path. The columns for the new west bridge will also be aligned with the east bridge. More information on water level targets can be found on the U.S. Army Corps of Engineers website.

At several points during construction, work will need to continue over weekends to take advantage of low traffic volumes and to keep the project on schedule. Typical weekend work hours are from 9 a.m. to 5 p.m., but mobilization and light work may begin earlier and extend later. Please note that during the fish window, work may occur 24/7.

The speed limit has been reduced to 25 MPH throughout the work zone for the safety of both the public and the construction team. This speed limit applies 24/7 and in both directions. If you see speeding through the work zone, please contact the City of Kenmore Police Department’s non-emergency phone line at 206-296-3311.

One of the main goals of the project is improved safety for pedestrians and bicyclists. During construction, walking and biking paths will be rerouted away from construction activity and temporary signs will be used to make it easy for commuters to find and use the new, temporary routes. Pedestrian traffic has been shifted exclusively to the east side of the bridge. If construction is interfering with pedestrian access, please locate a flagger who will help provide guidance to safely navigate the construction zone. Bicyclists will share the roadway with vehicles, however if you do not feel comfortable sharing the roadway, please dismount and walk your bicycle across the bridge on the east sidewalk

There were many factors that had to be considered when the City evaluated this intersection, and unfortunately, we were not able to accommodate all needs.  The City had to make the difficult decision to remove the right turn pocket for a number of reasons with safety for all users being the biggest decision factor.

Second, by eliminating the turn pocket lane, there is now enough room to build a continuous sidewalk and separated bike path from NE 175th St to NE 170th St, connecting to new sidewalk and bike lanes along Juanita Dr NE extending all the way to Kenmore’s southern border at NE 143rd St. Both pedestrians and bicyclists will be able to safely travel separately from vehicular traffic along the 68th Ave NE/Juanita Dr NE Corridor, which significantly improves safety for individuals traveling by these modes of transportation.

The City is mandated to make these safety improvements to comply with the Complete Streets Ordinance, which requires that street designs are consistent with the City’s Target Zero Initiative. This initiative was precipitated by three tragic traffic-related deaths in 2014 involving pedestrians and bicyclists and has the goal of achieving zero pedestrian and bicyclist fatalities and serious injuries by 2025.  Providing a safe and separated area for bicyclists and pedestrians helps the City move towards meeting this goal of safety for multi-modal users.

Finally, the removal of the turn lane reduces the crossing distance which reduces the amount of time needed for a pedestrian to cross the street.  This results in a shorter green light going east/west for vehicles traveling on NE 170th St./Inglewood Dr., (green light duration is typically governed by the time it takes a pedestrian to cross the street). This reduction in crossing duration will allow for a shorter east/west traffic light cycle when fewer vehicles are present traveling west/east. This in turn will allow us to add more “green time” to the north/south direction on 68th Ave NE, which will help offset the intersection impacts caused by removing the right turn pocket by moving more vehicles through the intersection during each green light.

There were other reasons we had to consider which resulted in the decision to eliminate the right turn pocket, including a lack of available public right-of-way and the costs and impacts of acquiring land on 68th Ave NE to widen the road and make the needed safety improvements AND keep the turn lane.

The construction team learned that the delivery of bridge girders, which are the bridge support systems that span between the foundation columns, was delayed by the COVID-19 outbreak. With the delay of these critical components, the City of Kenmore had to consider alternate options to complete the project within the projected timeline. Two options were submitted by project staff to Kenmore City Council to consider:

With overwhelming support for Option 2 by people who provided public comment and/or sent emails to the City, Council selected Option 2 at the meeting on August 3.

There will be several advantages to implementing Option 2, which include:

Please note, these benefits will also be accompanied by long traffic delays due to fewer north- and south-bound traffic lanes across the bridge.

In addition to the use of UPOs, the following measures will be taken to mitigate traffic congestion:

The City is in the process of working out more specifics with the Contractor, Ceccanti, and more details will be available later in the year.

Yes. When the Kenmore Boat Launch parking lot is full, there is additional parking in the City right-of-way along NE 175th St, west of 65th Ave NE.

These projects are occurring at the same time because of the circumstances impacting the schedule of the projects. The West Sammamish River Bridge Replacement Project is a three-year project, which was scheduled to begin in 2019 but was delayed due to permitting issues caused by the 2019 federal government shut down. Additionally, due to the bridge’s poor condition, the City had to act as quickly as possible to replace the bridge once final permits were secured.

The Juanita Dr NE Pedestrian and Bicycle Improvements Project's schedule is governed by the voter-approved Walkways and Waterways bond measure, which requires that all projects be implemented, and bond measure funds spent, by 2023. Given these circumstances, the projects would have overlapped regardless of when construction began.

If you have incurred damages because of construction, you can file a claim via the City of Kenmore’s website. Please follow the link below to fill out and submit a claim form.